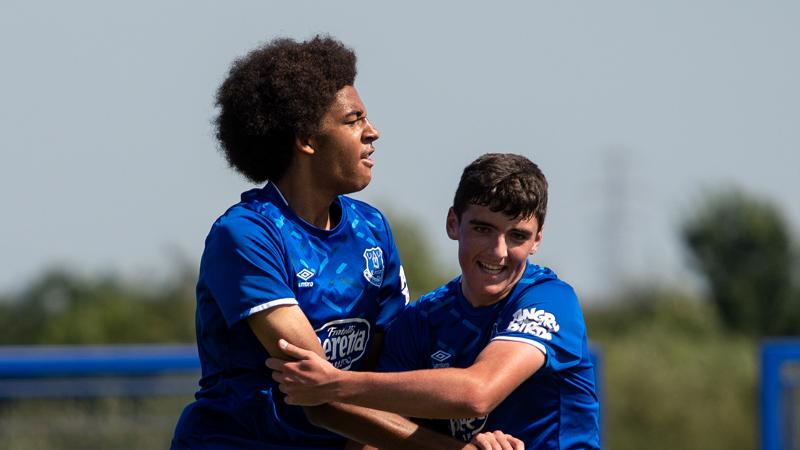 Everton scored inside 60 seconds against Sunderland and after Sebastian Quirk’s breakthrough goal showed their opponents no mercy.

Tait’s side was 5-0 up at half-time and – in front of Everton’s former Sunderland goalkeeper Jordan Pickford, watching at USM Finch Farm – had doubled their tally by the final whistle.

If he was pleased with his side’s efficiency in front of goal, Tait was equally satisfied to achieve a first clean sheet this term.

“We made a fantastic start and applied all the things we’d been working on in training,” Tait told evertonfc.com.

“With young players, you are always looking for consistency.

“We had only four players older than 16 and young centre halves particularly will be inconsistent.

“It is a work in progress, so it was really pleasing we did get the clean sheet.

“It sounds odd when you’ve won 10-0 but there were still really good pieces of defensive play and Sunderland did put us under pressure.”

Equally, the manager urged his team to retain the intensity and purpose which had put the outcome beyond doubt.

Lewis Warrington, Rhys Hughes from the spot and, in the final minute, Max Thompson completed the scoring. Quirk had earlier netted his second, while Tyler Onyango returned from England Under-17 duty with a ninth-minute strike.

“We have worked on the lads remaining focussed on getting the ball back as quickly as possible, then hurting the opposition,” said Tait.

“I said we’d set the standards in the first half and the challenge was to replicate that in the second half. And that’s what we did.

“Sunderland were still dangerous at stages of the first half.

“Tom [Cannon] has scored goals all the way through the Academy [he joined aged six], it is a strength of his. He has lots to do in other areas, he is a young player but he knows where the net is.”

Everton climbed to fourth in the table following their weekend success and are six points adrift of leaders Manchester City with a game in hand.

Tait takes his young Blues to Manchester United next Saturday and a fortnight later Everton welcome Liverpool to Finch Farm for the season’s first Merseyside derby.

“You don’t get too high or too low with any result,” added Tait.

“We will review the Sunderland game on Monday and it will be a positive review.

“But we will quickly move on to United and work on the different areas we’ll need to focus on to do well against them next week.

“We talked on Friday about the really important games coming up.

“There are players trying to get in the side and competition for places which is great.

“This win sets us up for our week’s work now

“It is the perfect springboard for an exciting couple of weeks.”

International Call ups for Youngsters
Derby County Defeat Manchester​ United in 5-1 Victory
We use cookies on our website to give you the most relevant experience by remembering your preferences and repeat visits. By clicking “Accept All”, you consent to the use of ALL the cookies. However, you may visit "Cookie Settings" to provide a controlled consent.
Cookie SettingsAccept All
Manage consent