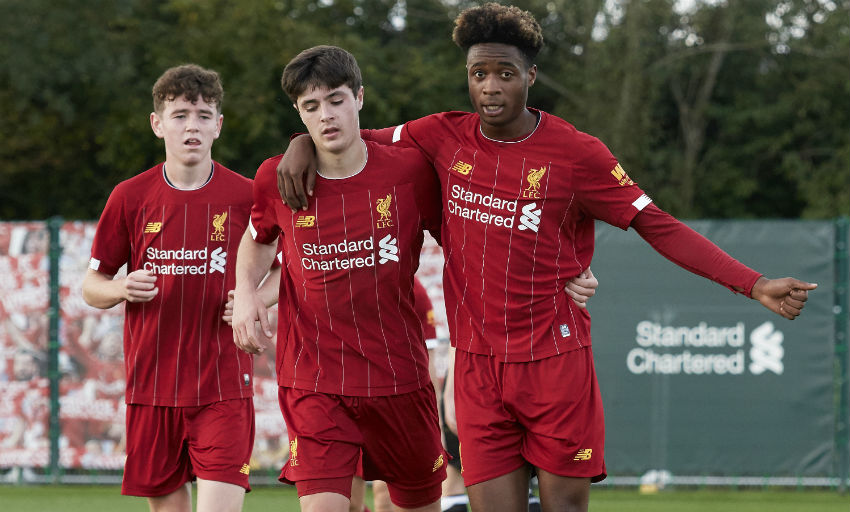 During a weekend in which Curtis Jones and Liverpool’s youngsters dealt a damning blow to their crosstown rivals Everton in the FA Cup, their U18 side – and Layton Stewart in particular – shone further light on Liverpool’s already glowing academy prospects with a 3-0 win over Blackburn Rovers. Stewart bagged himself a second-half brace for the home-side and capped off a wonderful display by laying one on for Fidel O’Rourke to give Liverpool a convincing win.

The young striker got off the mark shortly after half-time when the Reds managed to clear a Blackburn corner upfield, Rovers ‘keeper Jordan Eastham came racing out of his area to intercept the long ball but only managed to collide with his team-mate, leaving Stewart free to convert into an empty net. Less than 20 minutes later the Liverpudlian had his second, Tyler Morton’s smart turn in the area earned his side a penalty and Stewart duly obliged to make it 12 for the season.

There was still time to add further gloss to an already gleaming performance for Stewart, though rather than completing his hat-trick after being put in by Morton, he unselfishly squared the ball to strike-partner O’Rourke for an easy finish.

Meanwhile, in the U18 Premier League South, Chelsea managed to keep hold of top-spot and remain unbeaten after hosting fellow Londoners Arsenal, who fought back well from two goals down to earn a 2-2 draw. The Blues took the lead in the first-half through Marcel Lewis who, after a good cross from the right-hand side, improvised well on the loose ball to direct his shot over the ‘keeper and in off the underside of the crossbar.

Midfielder Joe Haigh was brought on with just over 20 minutes remaining and almost instantly he increased Chelsea’s lead, bagging his seventh goal of the season. Sam Iling-Junior’s cross from the left found Haigh in a pocket of space six yards out and the substitute maintained his composure to finish calmly.

The game looked to be over until Sam Greenwood curled in an exquisite free kick from 25 yards out, with the ball looping over the wall and dipping down just in time to find the top corner. Arsenal’s tails were now up and in the 84th minute they grabbed the equaliser through Matthew Dennis, who managed to put the finishing touch to a goalmouth scramble.

Three points below Chelsea in the table after failing to maintain their own unbeaten run during the weekend’s fixtures were Fulham, who went down 4-1 away to Tottenham Hotspur. A double from Harvey White and an inspired performance from winger J’Neil Bennett helped to seal a significant victory for the home-side.

White opened the scoring from the spot in the first half after Max Robson was brought down and just a minute after the break Spurs’ lead was doubled. Bennett’s cross from the left hand-side found its way to fellow winger Romaine Mundle, who was left with an easy finish to further secure the North London side’s lead. Eight minutes later and Bennett was again involved, tormenting Fulham’s right-flank to earn his side another goal-scoring opportunity from 12 yards out, from which White stepped up and got his second of the game to make it 3-0 Spurs.

The Cottagers then received a much-needed lifeline when Ollie O’Neill’s deflected cross looped the ball into the path of Jean-Pierre Tiehi, who scrambled the ball over the line to give his side hope, however it proved to be futile. More great work from Bennett led to substitute Tarrelle Whittaker sealing victory for the home side with eight minutes remaining.

Norwich and Leicester played out a thrilling 4-4 draw in their U18 South fixture. Sidnei Tavares opened proceedings from the spot to give his side the lead, but just two minutes later the home side were level through Tyrese Omotoye. Leicester again put themselves in front after Kasey McAteer converted, but their resolve was instantly tested and broken when the Canaries’ Thomas Dickson-Peters equalised soon after to make it 2-2 at half time.

Jon Rowe and Tony Springett almost took the game out of sight for Norwich to make it 4-2 with 20 minutes left, but this time it was Leicester’s turn to draw back level having previously taken the lead twice. With 80 minutes on the clock, Kian Pennant gave the Foxes a much-needed confidence boost, leading to McAteer grabbing his second of the game and earning a point for Leicester in a thrilling encounter.

Also making up a two-goal deficit to clutch a point from the jaws of defeat were Southampton. They found themselves a goal down at Aston Villa after 12 minutes when Aaron Ramsey put the home side ahead, adding further insult to injury when Seamas Keogh turned a low cross into his own net just two minutes later.

The Saints then gave themselves a lifeline soon after when Sam Bellis capitalised on a loose pass from Villa ‘keeper Filip Marshall, but they were to wait until the dying embers to find themselves the equaliser they’d spent 70 minutes seeking. James Morris fired in a great cross for the unmarked substitute Callum Watts to head home emphatically in the 92nd minute.

Back to the Northern League and a late brace from Stoke’s Belgian youngster Andre Godfrinne ensured all three points away to Wolverhampton Wanderers. Mohamed Sankoh benefitted from a terrible Wolves error in the second minute, but they pulled one back through Theo Corbeanu after Stoke ‘keeper Xander Parke’s took his turn to drop a clanger, allowing the Wolves player to make it 1-1.

With six minutes left to play, a simple long ball allowed substitute Godfrinne to head home, and soon after he secured all three points when a poor Wolves clearance allowed him to finish into an empty net to end the game 3-1.