Tino Anjorin scored inside five minutes, but Villa struck back almost immediately through Aaron Ramsey, who made the most of a defensive error to bend his shot into the far corner. 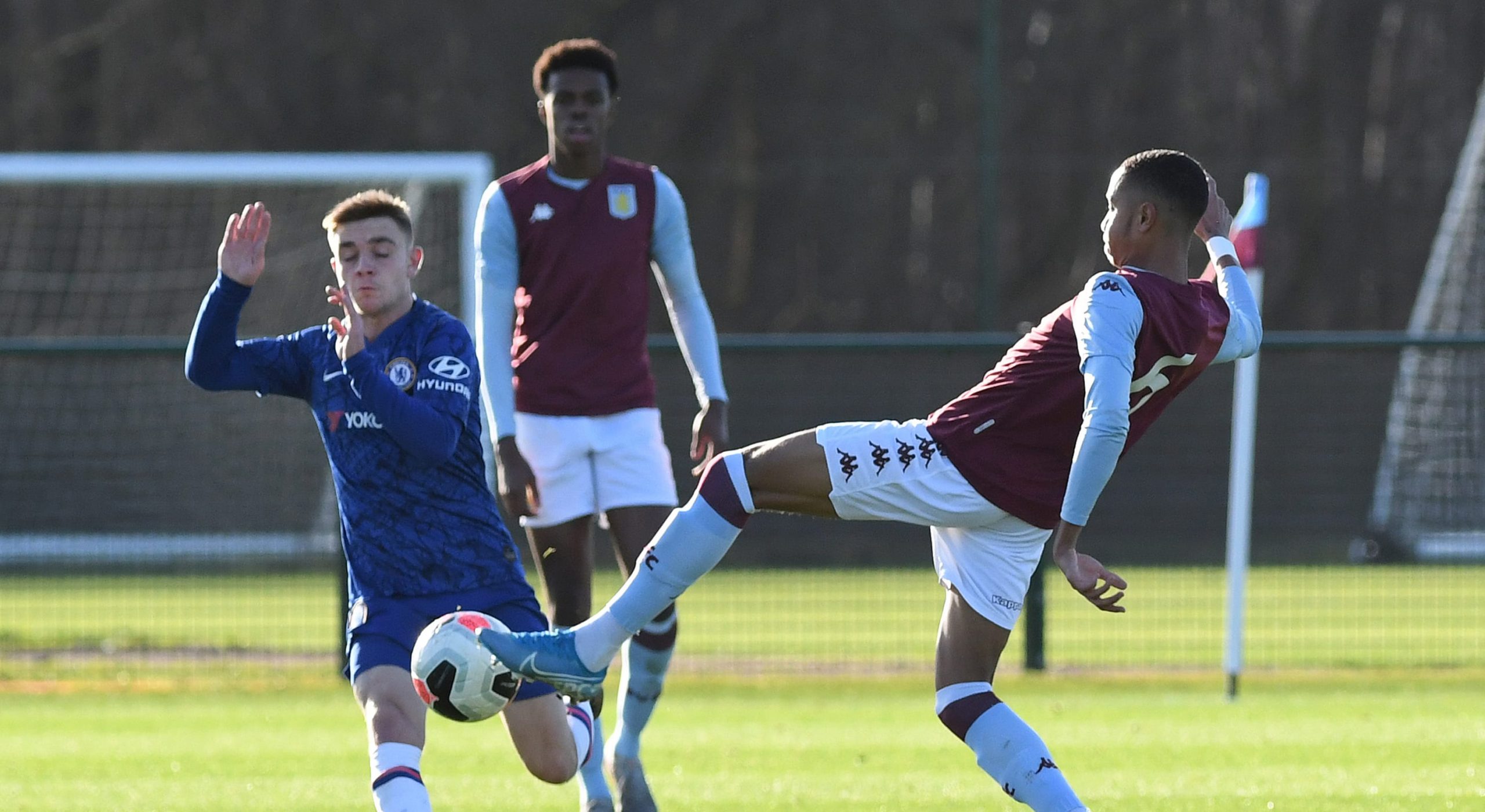 After going 12 league games unbeaten, Chelsea suffered their second defeat in as many games away to Aston Villa, who put up a resilient performance to grab all three points.

The Blues drew first blood in the encounter after Tino Anjorin scored inside five minutes, but Villa struck back almost immediately through Aaron Ramsey, who made the most of a defensive error to bend his shot into the far corner.

At the restart Chelsea again took the lead within five minutes, this time it was Lewis Bate who met Marcel Lewis’ cross perfectly to make it 2-1 but, just as in the first half, Villa responded within ten minutes of the Blues’ goal. Jaden Philogene-Bidace reacted quickest after a partially cleared corner, thundering the ball home through a crowded penalty area on 58 minutes.

Chelsea then looked the more likely side to get the win as they created the better chances, but this time it was the turn of Aston Villa to take the lead. Ramsey grabbed his second of the game with four minutes remaining to give the Villains an unlikely win.

Tottenham made it four league wins in a row at home to Swansea on Saturday morning with a 3-0 victory as Spur’s youngster J’Neil Bennett once again impressed, popping up with another goal and assist to add to his tally.

It was bottom side Swansea however, who started the game strongest as Josh Thomas saw two good chances go begging for the away side and having failed to take the initiative, it was Spurs who were to open the scoring on 20 minutes.

In-form winger Bennett didn’t take long to get in on the action and it was his ball in from the left that presented Kion Etete with a simple finish from close-range. The towering striker was then involved once more just over ten minutes later after being put in by Max Robson, and did well to hold up the ball and play in the onrushing Nile John, who made it 2-0 and scored on his return from injury.

Spurs then had to wait until the 89th minute to get that all important third goal and seal the win. Once again Bennett burst down the left flank, but this time rather than cross, he cut inside and curled a beautiful effort into the top corner.

Premier League North leaders Manchester City travelled to Merseyside on Saturday looking for their eighth consecutive win, however they came up against a stubborn Everton side who defended well to earn themselves a point.

The Toffees started well and managed to grab the game’s first goal within ten minutes after a defensive mistake from City. CJ Egan-Riley attempted to play the ball out from the back, but his pass was pounced upon by top-scorer Tom Cannon, who had ample time to run into space with the ball and square for Lewis Dobbin to finish.

City began to grow into the game and were almost level when Alex Robertson’s acrobatic overhead-kick came back off the crossbar, but they didn’t have to wait much longer for their equaliser. Shortly after, Cole Palmer was brought down in the area by two Everton defenders to win a penalty, with the captain then stepping up to send the ‘keeper the wrong way and get his fourteenth goal in 12 league games. Both sides then had good chances to take all three points in the second half with Everton’s Cannon missing two good opportunities, as well as City captain Palmer and the ever-reliable James McAtee failing to convert, but it finished a draw, City’s first of the season and only the third time they’ve dropped points in 14 games.

Two second half goals gave Derby a comfortable win over tenth place Middlesbrough, as goals from Eiran Cashin and Jack Stretton gave them their second win on the bounce.

Captain Cashin got on the end of a dangerous Jaden Charles’ corner to power his header home and give Derby the advantage. It was another set piece that brought their second of the game and Cashin was once again involved, albeit rather fortuitously, when the ball bounced off him to the edge of the area where Stretton was waiting. The striker opened up his body and hit a powerful half-volley into the home-side’s net, sealing a somewhat routine win for the Rams.

West Ham failed to build upon last week’s impressive win against U18 Premier League South leaders Chelsea as they drew at home to mid-table side Reading.

Although taking an element of last week’s performance into this game and starting well, the Hammers could not convert the good, early chances they forged for themselves and were left to rue those misses when Reading took the lead. With almost 30 minutes on the clock, defender Nelson Abbey converted from Imari Samuel’s corner kick, spurring their side on to create more chances before the interval, though they were unable to increase their lead.

West Ham came out refreshed for the second half and took the game to Reading, much as they had at the start of the game. They eventually got their equaliser with 15 minutes left to play when attacking midfielder Dan Chester, who at first looked to be lining up a shot, cut the ball back to top scorer Veron Parkes, who made no mistake from inside the area and scored his third goal in as many games to make it 1-1 and end the game a draw.

Having played each other just nine days ago in the FA Youth Cup it was more of the same in terms of who came out on top, with Arsenal scoring one more than they did last time around to seal the victory.

The Gunners took the lead in the first half after an error from Southampton defender Zuriel Otseh-Taiwo led to him being dispossessed by Matthew Dennis, the winger then squared the ball to Alfie Matthews, who took a touch and fired his shot into the far corner from ten yards out.

Arsenal then picked up where they left off from after half time as Sam Greenwood’s corner was flicked on by Mazeed Ogungbo, his effort was kept out by the Saints ‘keeper but this allowed substitute Luke Plange to react quickest and give his side the victory.

After losing all three of their previous league games Brighton were looking to get some points back on the board, but in the end, they had to share the points with second-from-bottom side Norwich in a 1-1 draw.

The home side started the game brightest and took an early lead after just three minutes. Ayo Tanimowo’s cross was headed out to the edge of the area by a Norwich defender but fell right into the path of Jack Spong, who hit a sweet half-volley on his weaker foot to give his side the lead.

Just over half an hour later Norwich managed to equalise through Jon Rowe, who picked up his fifth goal of the league campaign. Tyrese Omotoye latched onto a through ball and moved it on to Rowe, who finished well from outside the area. Norwich then had a good chance at the end of the first half to win the game but couldn’t beat Roco Rees in the Brighton goal. There were also chances in the second half for Brighton to grab the three points they so craved, but Ben Wilson and Lorent Tolaj failed to capitalise.

Despite a dominant performance from away side West Bromwich Albion, this U18 Premier League North game somehow ended 0-0, with the Baggies missing plenty of chances to grab the win.

Alex Gilbert failed to convert from the spot just before half time, with West Brom also hitting the post from two chances following corners. This result leaves them sixth in the table, while Newcastle remain second-from-bottom with nine points from 13 games.