U18 Premier League Cup – Quarter Final Round Up

There were an astonishing 20 goals across the four quarter final fixtures in the U18 Premier League Cup this weekend, with eight of those coming in Stoke City’s tie against Norwich City. 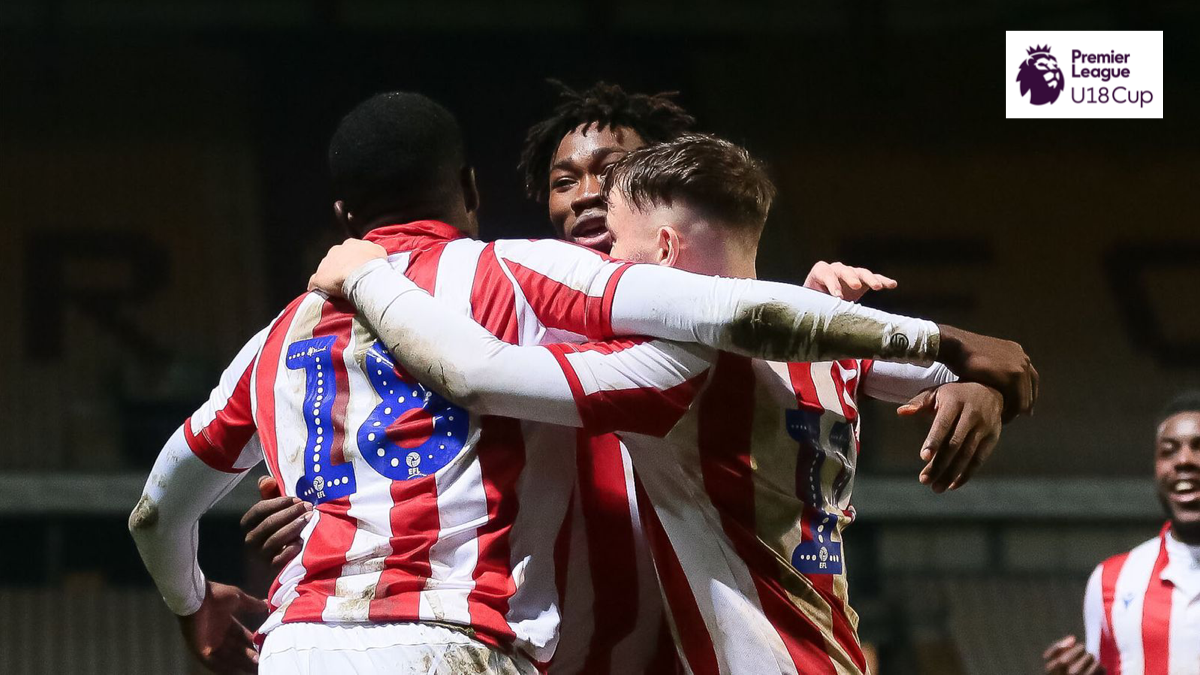 Dutch striker Mohamed Sankoh helped himself to a hat trick, scoring two of those in the first 20 minutes of the match as the Potters found themselves 3-0 up after just 17 minutes. Fellow front-man Andre Godfrinne bagged himself a brace in the first half, with Lewis Macari scoring just before the interval to give Stoke a 5-0 lead with 45 minutes still to play.

Captain Adam Porter made it six not long after the break as Norwich began to wish the ground would swallow them up. Sankoh completed his hat trick in the 65th minute to ensure he took home the match ball and midfielder Patrick Jarrett completed the rout with only four minutes left to play, ensuring Stoke cruised through to the semi-finals.

Also getting himself a hat trick during the cup weekend was Nahum Melvin-Lambert, who helped his side Reading progress at home to Everton, scoring the winning goal in extra time to send his side through to the last four.

Everton started the brighter of the two sides when Tom Cannon turned in Dobbin’s cross after just four minutes, but they found themselves behind less than 20 minutes later. Two close range finishes from Melvin-Lambert, the first coming after a great delivery from a free-kick, put Reading in front in a pulsating start to the game.

It took Everton just three minutes to respond after half time as Dobbin again supplied the cross for their goal, this time setting up Sean McAllister to thunder home. It remained level until the second half of extra time, when Melvin-Lambert rounded off his hat-trick in the 110th minute and gave Reading the 3-2 win.

Defending champions Manchester City made it through to the next round after the ever-dependable Cole Palmer’s double ensured they edged past a potentially tricky tie away at Brighton.

It was not all plain sailing for the City captain however, as his 14th minute penalty was saved by Brighton ‘keeper Fynn Talley, though he did well not to dwell on it for too long. Just minutes later, the City midfielder made amends after capitalising on a defensive error from Sam Packham to give his side a deserved lead that lasted until half time.

Four minutes after the restart, Sam Edozie was again brought down in the Brighton box and it was over to Palmer to keep his nerve from 12 yards out, which he did in empathic style, smashing the ball into the roof of the net to win the battle of wits over Talley.

Brighton then gave themselves a fighting chance with 30 minutes left to play after substitute Leahy put one on a plate for Lorent Tolaj, but City were to quell any chance of a come back when Alex Robertson made it 3-1 not long after. Packham then tried to make up for his first half error after scoring a wonder-strike in added time, but it was too late for Brighton and the game finished 3-2.

Chelsea ran out 2-0 winners away at Newcastle United in a game that saw good chances for both sides, though it was the Blues who managed to make the most of theirs as they progressed through to put their name in the hat for the semi-final draw.

After just six minutes the Blues took the lead through captain Sam McClelland, who rose highest at the back post from Marcel Lewis’ corner to head home emphatically. It was to remain 1-0 to Chelsea until the hour mark, when some more good play from Lewis saw him win the ball back well on the edge of the Newcastle area and thread a perfectly weighted through ball to Dion Rankine, who’s effort rather fortuitously came back off the Newcastle ‘keeper to give him an easy finish.

Chelsea could then have added more goals to make the result safe before the game’s end but it remained 2-0 and they now make up an exciting four-team draw for the next round.