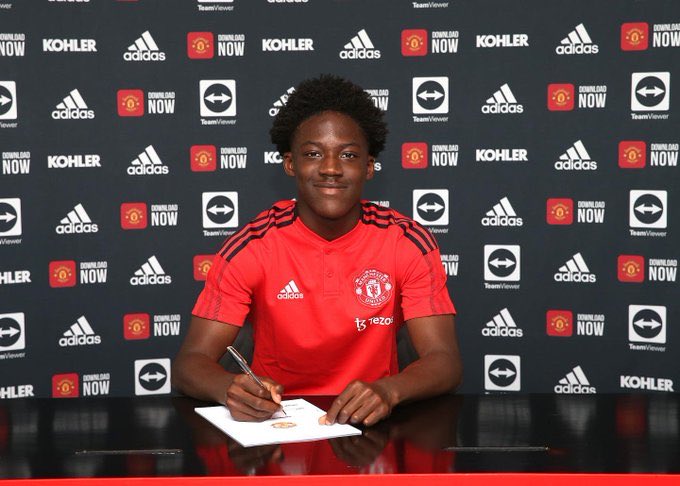 Kobbie Mainoo who has just come off an FA Youth Cup win adds another achievement as he puts pen to paper on his first professional contract.

Mainoo who joined Manchester United academy when he was nine years old has made 17 appearances for United’s U-18 side scoring two goals and having one assist. The midfielder also achieved the same stats in the PL2 only needing 6 appearances.

Manchester United didn’t make any announce of the signing, but posting on instagram, Mainoo confirmed on his page with the caption: ”happy to sign my first professional contract with @manchesterunited great way to end a successful season”

Mainoo had a started in all 6 matches for United in their FA Youth cup campaign finishing with a solid performance displaying great midfielder skills last Wednesday at the FA Youth Cup final in Old Trafford in front of 66492 fans. A full Old Trafford experience is something we are expecting Kobbie Mainoo to get used to as he is moving through the ranks hoping to get an appearance with the senior side.

Next season he will still be featured with the U18s but is expected to make more PL2 appearances to develop his abilities.

Neil Ryan leaves Manchester United after 19 years of service
2022 UEFA U17 European Championships kicks off
We use cookies on our website to give you the most relevant experience by remembering your preferences and repeat visits. By clicking “Accept All”, you consent to the use of ALL the cookies. However, you may visit "Cookie Settings" to provide a controlled consent.
Cookie SettingsAccept All
Manage consent