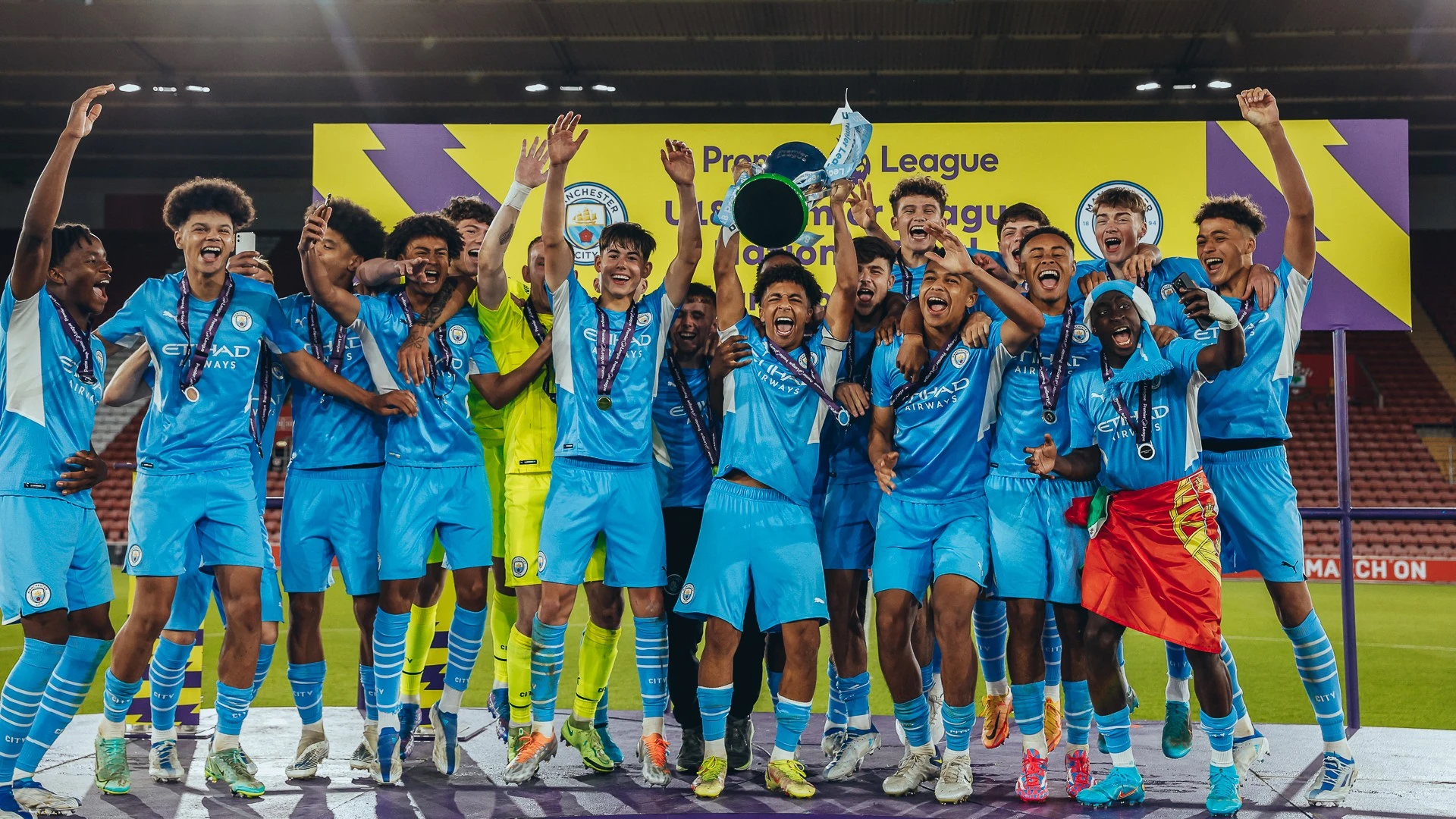 Manchester City U18 have done 3peat of the U18 Premier League after their 2-1 win over Southampton. They are the first team in history to win the u18 Premier League three times consecutively in the leagues 10 year history.

Manchester City has had a very successful year at the academy for all levels. The U18s already claimed their u18 Premier League North title by a distance a month prior, the U23s won the PL2 becoming the first team in history to win back to back titles. The U16 and U17s won the Premier League Cup and the U14s reached the final of the Albert Phelan Cup.

Southampton have also had a great season, winning the U18 premier league south title for the second time in the clubs history and having the best record in the league with one more point than city.

It was Southampton who set the pace with lots of energy fuelled by 13035 Saint fans and a marching brass band giving the young saints side a grand entrance onto the pitch.

Sodje had the first opportunity to be on the scoresheet instigated by a fastball from Nico O’Reilly in the box but was off target.

Southampton responded instantly at the other end as Kamari Doyle moved past Lewis but was denied the back of the net by Josh McNamara.

It will be moments before he would be rewarded for the Intense pressure he gave out to City’s defence with teammate Milan Edwards which forced the former saints player Max Alleyne to play the ball back to McNamara whose clearance ball gets deflected to find Cameron Bragg who sets up Doyle to shoot a curler edging McNamara by the tips to make it 1-0 in the 14th minute.

Shea Charles responded with a shot across goal which may have been intended as a pass but was cleared for a corner kick.

City’s equaliser arrived in the 23rd minute, six minutes after Doyle’s goal when Mebude received the through ball in full sprint to then find Sodje for the tap in.

Sodje missed a large amount of the season due to recovery from surgery, so his goal definitely did showcase what he can do. The same goes for Carlos Borges who doesn’t want to be slept on after missing playing time due to injuries. If you did sleep on Borges then his next play was sure to wake you up like an annoying iPhone alarm tone when he sets up Mebude with the long ball right on the money on the right flank dazzling Southampton’s defence with stepovers before finding his spot and beating Eddie Beach to flip the game on its head.

Southampton came out the second half refuelled by the home fans roaring support. Saints midfielder Ryan Finnigan was showing his worth on both ends of the pitch. He denied City’s attempt of making 3-1 by stopping Carlos Borges in his own 18-yard box and then having a good attempt at goal from distance.

More goal oppurintes came for city when Borges breezed up the left wing to cross the ball to Mebude who finds O’reilly for the chance, but just wasnt enough salt and pepper on the shot.

Carl Martin made some changes brining on Jimmy Jay Morgan for Sonnie Davis who ended up being the spark off the bench who had his attempt miss by a matter of inches after being set up by Doyle.

Ben Wilkingson’s young side kept their composure and focus to see out the game to win their third consecutive National Title.

2022 U17 EURO Championship: Matchday 2
2022 U17 EURO Championship: Matchday 3
We use cookies on our website to give you the most relevant experience by remembering your preferences and repeat visits. By clicking “Accept All”, you consent to the use of ALL the cookies. However, you may visit "Cookie Settings" to provide a controlled consent.
Cookie SettingsAccept All
Manage consent