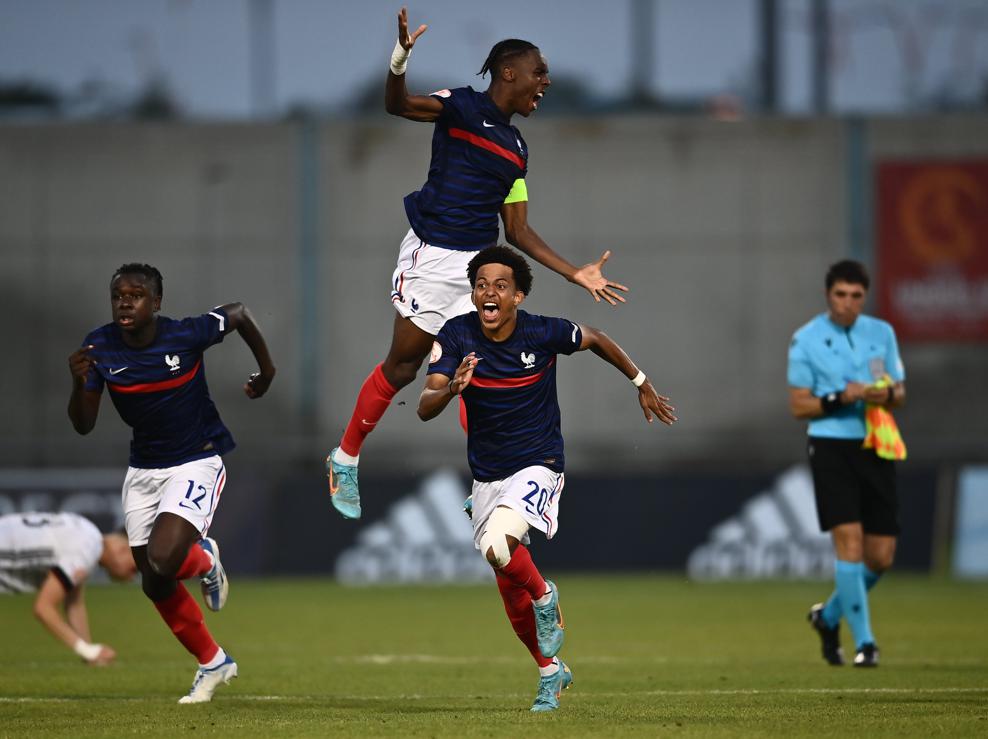 The quarterfinals of the U17 Euros are here. All eight teams have been battled tested and are ready to progress to the next stage. France defeated Germany in a very tense penalty shootout that would take your breath away. Whereas the defending champions Netherlands only needed 90 minutes to book themselves a spot in the semis. An outstanding performance from Jovan Milošević leads Serbia to the final four and Portugal defeats arch-rival Spain to play in the semis.

France seemed to be settled into the game a lot faster than the Germans, so they were able to create more scoring opportunities earlier on. The first is from Warren Zaïre-Emery performing a great header that just missed the goal, followed by a rolled shot by Tom Saettel. Saettel will strike gold on his next attempt when he receives the ball and shows patients before he changes speed to create space before launching a power shot to find the back of the net.

Germany would find their equaliser in the 38th minute when Nelson Weiper receives the ball from Dženan Pejčinović and quickly reacts to the oncoming defence by chipping and lobbing the keeper to find the back of the net. Lars Raebiger almost makes it 2-1 on a couple of occasions, both attempts being power shots outside the 18-yard box but were denied by Lisandru Olmeta’s great goalkeeping.

The match would end up being decided from 12 yards as there were no winners after 90 minutes. Germany would have the early advantage when France missed the first two penalties. Mathys Tel scores a crucial penalty to keep France alive. Maurice Krattenmacher misses a penalty that could put Germany through, so it then gave the opportunity for France to take the lead which ends up happening when Zoumana Diallo scored. The pressure was now on Paulo Fritschi to score and keep Germany in as it’s now in sudden death. He ends up missing by shooting over the crossbar. What a spectacle it was, France through to the semis. They will play Spain or Portugal in the semis.

The Netherlands are through to the semi-finals of the competition and are now a step closer to defending their title. The young Dutch side was very strong in the first half, taking control of the game. The opening goal wasn’t the prettiest thing to see but in sports it’s about getting the job done not looking pretty which is what happened when Jaden Slory makes a cross in the 18-yard box to find the young skipper Isaac Babadi who sets up Rainey Breinburg for a powerful strike that is saved by Federico Magro. Babadi picks up the deflection by heading the ball to Gabriel Misehouy who taps the ball into the goal with not much conviction.

Their second goal would look more exciting when Misehouy plays the cross to find Jason Van Duiven who does a textbook header to get his second goal of the tournament.

In the second half, Italy would apply pressure on the Netherlands and make it a tough 45 minutes. Their only goal would come in the 64th minute from the corner kick that found Luca Lipani for the beautiful John Terry like header.

The Netherlands almost made it 3-1 win when Babadi goes one on one with the keeper to launch a strike only to hit the crossbar. They will face Denmark or Serbia in the semi-finals.

Serbia started the game very confident and was putting pressure on Denmark early on. Serbia’s opening goal came very early at 3 minutes in. Jan-Carlo Simić gets a header from a free kick. Denmark tried to respond with a few counterplays early on but couldn’t deliver. Malek Bakhit had a good chance to grab the equaliser in the 16th minute but went wide on the left.

Both teams exchange blows during the first half both coming up with great chances. Jovan Milošević had a standout performance, he was a big problem for Radovan Krivokapić side to deal with. He had two good opportunities within seven minutes to make it 2-0. Milošević was also great on the other end of the pitch, saving a header from Julius Beck that was on target for goal with his own header in the 44th minute.

Denmark picked up right from where they left off in the second half, but it will only take them 3 minutes to find the equaliser. A run down the left flank by Elias Hansborg-Sørensen gets deep into the 18-yard box to find Emil Højlund for the tap in to make it 1-1.

Milošević is back in on the action again to give Serbia their winning goal. He receives the long pass from left-back Stefan Bukinac, having the first touch on the chest before blazing the ball to the bottom left giving the keeper no chance.

The final game of the quarterfinals took place at the Netanya stadium. There is a lot of history between these two teams all the way up to the senior level so it was bound to be an exciting match, especially with a semi-final spot on the line.

Spain came out of the gates firing with lots of scoring opportunities in the opening minutes. Portugal will capitalise on their chance when Afonso Moreira intercepts a poor back pass made by Spain scoring in a similar fashion to Milošević in the previous match-up.

A sequence of headers from Wassim Keddari to Javier Boñar from a corner kick gets the equaliser for Spain. Just before the half Spain gets really close again when Dani Pérez crosses the ball to Antonio Moreno but misses the header.

João Veloso delivers what could’ve gone down as the assist of the season by delivering a curling through ball to José Rodrigues who started celebrating early because he thought his shot was a sure thing but ended up hitting the left goal post.

Portugal is awarded a penalty in the 61st minute for a handball violation against Gasiorowski. Rodrigues steps up to the 12-yard spot and scores making it 1-2 and sending Portugal to semi-final where they will face France.

2022 U17 EURO Championship: Matchday 3
U17 Euro Semi-finals end with penalty shootouts
We use cookies on our website to give you the most relevant experience by remembering your preferences and repeat visits. By clicking “Accept All”, you consent to the use of ALL the cookies. However, you may visit "Cookie Settings" to provide a controlled consent.
Cookie SettingsAccept All
Manage consent