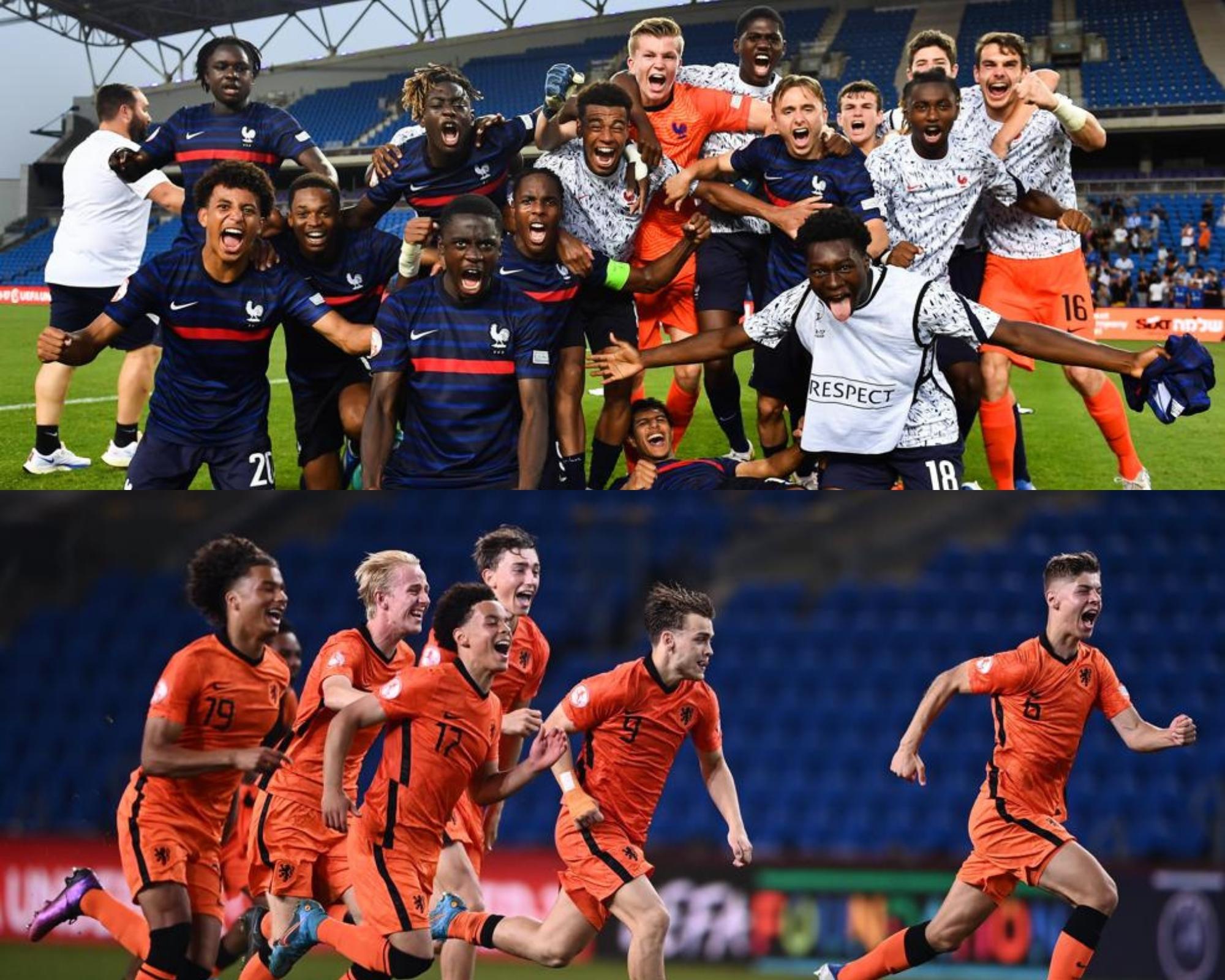 France and Netherlands will meet in the 2022 U17 European Championship after both semi-final matches were decided by a penalty shootout.

The match didn’t start off the sharpest for both teams. There was a lot of sloppy play which resulted in turnovers on both sides of the pitch. Zaire Emery takes full advantage of bad play when Portugal loses the ball and launches a bullet from about 20yards to make it 1-0.

Portugal would need only five minutes to find their equaliser, this time Ussumane Djaló taking advantage of poor play by intercepting a pass before finding Afonso Moreira on the right flank who taps in for goal.

Diogo Fernandes made some great saves for Portugal in the first half, he stopped a quick response from Tom Saettel who was on target with a solid strike.

Dàrio Essugo must have seen Emery’s goal and said ‘hold my water bottle’ because he scores a missile goal from near the halfway line which may potentially be the goal of the tournament. The score is 2-1 and towards the end of the half and José Lima instructs his young Portugal side to play a defensive game and not push forward.

The French captain Mathys Tel was very active in the game having two opportunities on target within 3 minutes.

Valentin Atangana plays a good ball into the box but comes off Portugals João Muniz’s leg for the own goal to tie the game just at the half. Portugal gain more chances in the second half to get them back in the game. Substitute Vivaldo Semedo misses a crucial header from a corner kick that goes wide. It was a big opportunity to score as there was poor defending from France during this play. Portugal was looking a bit flat towards the end of the game but France was unable to close the game out during the 90 minutes, so it was decided at the penalty spot.

France would go on to win 6-5 on penalties.

Four-time champions Netherlands have the opportunity to make it their fifth on Wednesday after being Serbia 5-3 on penalties.

Not much was going on in the opening minutes, both teams looked equal and were trying to find their stride. Jovan Mijatocić had back to back opportunities towards the end of the half but was denied by the woodwork. The game remained scoreless as the teams headed back to the changing rooms at the half.

Serbia started the second half very well defensively making it difficult for the Dutch side to get any rhythm. Tristan Kuijsten made some good saves along the stretch for the Netherlands. They will end up breaking the deadlock when Jaden Slory makes a great play down the right-wing that is so effective it causes the Serbian defender to fall. He then gets into the box and makes the pass to Jason Van Duiven who hits the ball in an unorthodox way that causes him to fall back and the ball to slowly stumble in to make it 1-0

The equaliser would come only four minutes later from none other than Serbia’s main man Jovan Miloševic who scores a brilliant header off the corner kick. It will then be third time lucky for Mijatocić when he finds the back of the net after picking up a deflection from a Miloševic acrobatic shooting effort.

Slory would find some glory for the equaliser when he is found by Mike Kleijn who makes a great run to find him for the tap in to make it 2-2.

The score would remain at 2-2 at Full time, and due to no extra time at U17 level the game went straight on to penalties, where the Netherlands will be victorious. They will face France on Wednesday 1st June.

2022 U17 EURO Championship: Quarterfinals
Jayden Braaf makes move to Borussia Dortmund on a free transfer
We use cookies on our website to give you the most relevant experience by remembering your preferences and repeat visits. By clicking “Accept All”, you consent to the use of ALL the cookies. However, you may visit "Cookie Settings" to provide a controlled consent.
Cookie SettingsAccept All
Manage consent