France have won their third European championship after defeating Netherlands 2-1 thanks to Sale Kumbedi three minute brace. Jaden Slory gave the Netherlands the lead in the second half but was not enough to stop Mathys Tel and his dominant French side, who hit the goalposts twice in the first half. 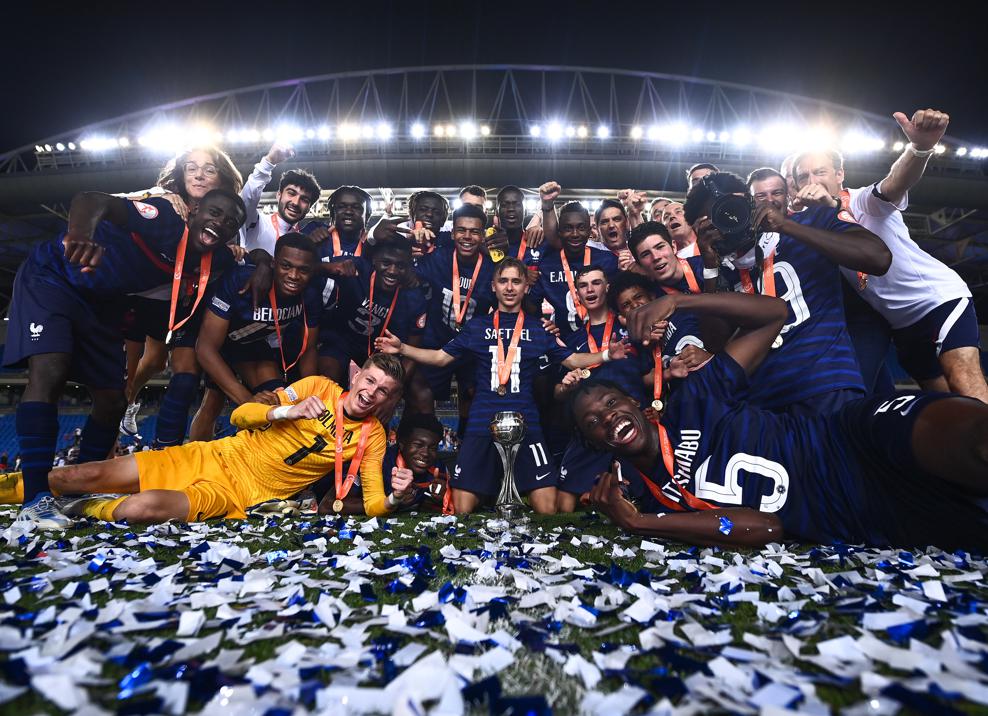 France have won their third European championship after defeating Netherlands 2-1 thanks to Sale Kumbedi three minute brace. Jaden Slory gave the Netherlands the lead in the second half but was not enough to stop Mathys Tel and his dominant French side, who hit the goalposts twice in the first half.

France came out of the gates firing. The first opportunity for a goal came in the first four minutes when France are awarded a free-kick. Mathys Tel steps up and takes the kick that curls around the wall to hit the far post and then trail along the goal line but nobody is close enough to tap it in.

Another opportunity for France to open up scoring came four minutes later when Tom Saettel cuts into the middle to launch a great strike that slaps the left goal post.

France was very unlucky in the early parts of the first half. They came out in full force and made it very difficult for the Netherlands to find their groove.

Saettel hustles and secures the ball back finding his partner in crime Tel on the left flank who makes a move inside for the low strike that misses the goal.

Towards the end of the first half, the holders start to get more of a foot in the game in terms of possession but are punished with a counterattack for every mistake.

Désiré Doué played a solid role in the match. His opportunity to get on the scoresheet came when France was awarded a free-kick that he took but sent the ball over the crossbar. Moments later he would play great defence by stripping the Netherlands defender and setting up Blokzijl who shoots wide.

French Coach, José Alcocer isn’t pleased with his young side. Despite a great first half, he believes that the score should reflect it. On the other hand, the Netherlands understand how lucky they are for the score to still be 0-0.

Jaden Slory gets the first goal of the game three minutes into the second half. The ball is played into him from Silvano Vos which lands on his chest before chipping the keeper sending the ball into the back of the net. What a beauty.

France displays some great football action when France’s Saettel demonstrates some footwork and plays around with Rover on the left before cutting back and finding Tel where he shoots a low shot that Tristan Kuijsten saves.

Their equaliser would come in the 58th minute when Doué plays the ball wide to Kumbedi who moves past a Dutch defender and launches a shot from outside the 18-yard area to find the goal.

Tel almost makes it 2-1 but is denied again by Kuijsten. The Rennes forward will be back in on the action when he strikes after cutting into the middle area and shooting to be deflected by Kuijsten which falls into the lap of an unmarked Kumbedi who has the easy task of tapping the ball in. (2-1)

The Netherlands have a few opportunities to equalise but it wasn’t enough to get back in the game. The final whistle blows and France run around in celebrations as they have won their third European Championship.

Jayden Braaf makes move to Borussia Dortmund on a free transfer
We use cookies on our website to give you the most relevant experience by remembering your preferences and repeat visits. By clicking “Accept All”, you consent to the use of ALL the cookies. However, you may visit "Cookie Settings" to provide a controlled consent.
Cookie SettingsAccept All
Manage consent